Shotgun Facelift with Anomic and Fel 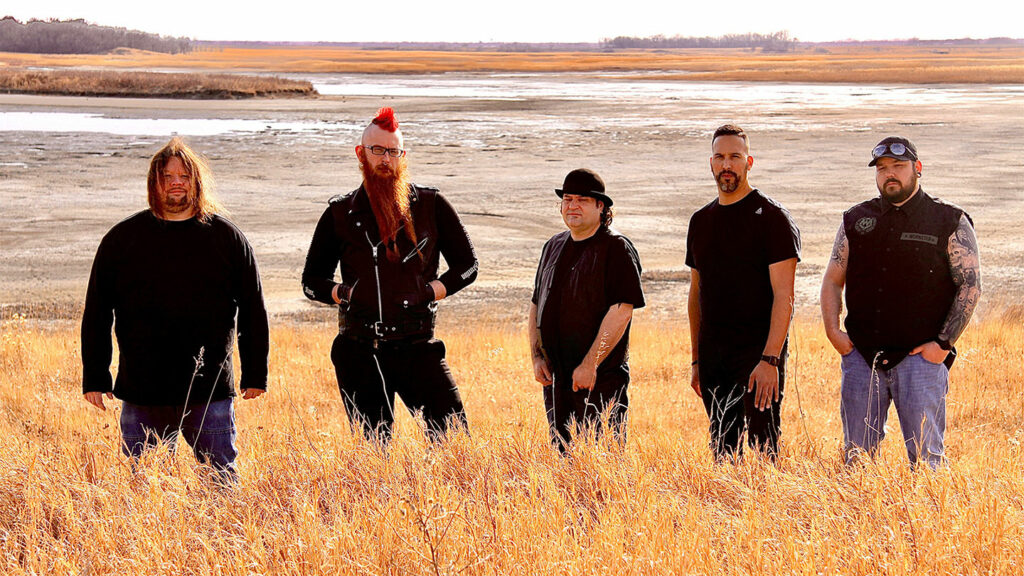 SHOTGUN FACELIFT was formed in Grand Forks, North Dakota (2012). The band plays an infectious blend of melodic power groove spawned by the New Wave of American Heavy Metal of the early 2000s. The band’s second full- length album due out later this year is called Dakota Blood Stampede and it is appropriately titled. It is anthemic, topical and relentless—nearly as if the entire album is making up for lost time.

The band has undergone many lineup changes since its inception and getting to the debut of this second album has been a testament to the enduring will of lead guitarist Damian Goulet. He explains, “I started this band almost ten years ago. We’ve been through more members than I can f***kin’ count, and more s*** than I care to remember, but this lineup is the one. This band has never been stronger than it is right now. This album is going to prove that. It’s a good record, and I’m really proud of it. Period. And working with Eclipse Records is going to give us the final push I know we’ve always needed. Hungry doesn’t even begin to describe it. This record is beyond that. It has teeth.”

The band’s original lineup released a full-length demo, called 21311, and the EP 21311 REVISITED. The band became renowned for their infectious melody and groove as well as their smart songwriting. The band landed radio spots with Dakota Damnation as well as Loud And Local from Minneapolis, which led to notable bookings alongside Threatpoint, Bobaflex and Art Of Anarchy; eventually culminating in a booking for Wisconsin’s Rockfest. Bad news was on the horizon, however. Soon after their success had begun, the original vocalist Tim Fortner left the band, and a long hiatus ensued. But Damian Goulet, the lead guitarist and last original member after eight years, still had bassist Curt DeCamp. And the pair soon set out with stoic conviction only found in their brutal North Dakota winters.

John Huber was auditioned and hired to handle vocals. John was off the heels of his third Skeleton Rose release Necro and an Album of the Year nomination from the Independent Music Awards for his first album Black Rose. John’s more aggressive guttural style began to take the band into a more brutal direction, and after months of gelling on the road, more major adjustments were made to further advance the band’s newer vision. An even groovier, nastier, leaner and meaner band began to emerge. After Shotgun Facelift’s longtime sister band Savior Sorrow went defunct, Matt Person (guitars) and Jody Smith (drums) were absorbed into the band. Both Matt and Jody are known for their tighter grooves and aggressive hooks which made Savior Sorrow such a force before its moratorium. The bands had been close friends for years, which made them not only a perfect fit for a heavier and more aggressive Shotgun Facelift, but took the band into a brand of synergy, efficiency and brutality they had never previously known. Simply, Shotgun Facelift went from a good band, to one that was downright anthemic. Something entirely real in an era of glass and plastic. And being real, transparent, and made of flesh is something the band takes great pride in promoting.

The new album is called Dakota Blood Stampede, and remaining entirely ‘real’ was the utmost focus for the record. Tyler Pilot of Red Dot Recording was tapped to handle the production and the massive task of tracking the entire album live. Damian Goulet further explains, “We wanted this album to be real as real gets, so we tracked it as live as possible. Everyone playing at once. It’s exhausting, but the proof comes through. This thing is what fans told us they wanted—our live show come to life. It sounds like we’re playing right in front of you, like you’re in the ****ing room. Nasty, real and loud. You’ll believe it and you’ll feel it, and that’s metal. To us, anyway.” Drummer Jody Smith continues on about the entire method Tyler Pilot employed through the band to bring the vision to life. Jody explains, “I wanted to beat people’s skulls in on this record with the drum sound. I wanted deep, deep, deep. Total attitude, you know? That’s what this band is, and only that kind of drum sound fits it. Tyler did a great job of capturing that.”

Vocalist John Huber expanded upon the album’s entire execution by saying, “When we put the tracks together for the record, it was more than just a collective of finished songs. There was a pattern, a noticeable journey and theme. We noticed that we really don’t sound like any of our peers. We felt quite a bit like Pantera with COWBOYS FROM HELL. Pantera didn’t fit in Texas, so they made Texas fit them. We felt, and do feel, the same way about North Dakota. So, we leaned into that as a loose theme for the record. It isn’t a North Dakota Metal concept album, but we do explore our relationship with the Dakotas on the record. It isn’t always pretty, but it’s a part of who we are, it helped shape us and the music we make. It’s in our skin. Every band examines where they come from at some point, so we figured, why not start now? At least that’s the way I approached a lot of the lyrics. There wasn’t any room for lying or misrepresentation. I put my spine into every scream. I don’t know any other way, and the sheer honesty on the record is something that’s really special. It’s a very transparent record, and I think that’s part of what makes it so visceral and gripping.”

Every band member brings 20+ years of metal experience, and the maturity is immediately palpable. The album itself is brimming with no-nonsense rockers built for every arena in the land. This is a band of men who have ground themselves upon the proving stone for years. And at the end of it all is only the beginning, because this band is very wise. They have quite a lot to say… and when they do, they do so with class, poise and undeniable power.